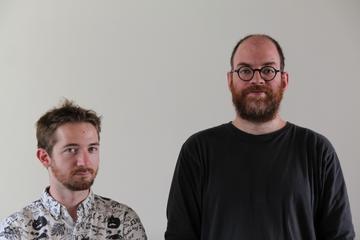 "Ulysse & Martin are part of Quart Avant Poing, a collective of Parisian audiovisual art founded in 2009 by three friends, graphic designers trained at the Penninghen School. From its beginnings, the collective expresses itself using many different means (video, painting, modeling, mini-websites, DJ sets etc.) in a spirit of improvisation and exquisite corpse. Our experiences led us to produce video loops and clips for the musicians of the Parisian electronic scene, and gradually we wanted to work on less "decorative" formats and start to make films, and write scenarios . That's when we met Miyu Productions, who suggested we work with Sam Albaric on an animated documentary. We immediately agreed because Sam's film was more authentic and less absurd than what we had done so far, and we are always enthusiastic to try new things.“5 years after the war” is their first film as directors too.